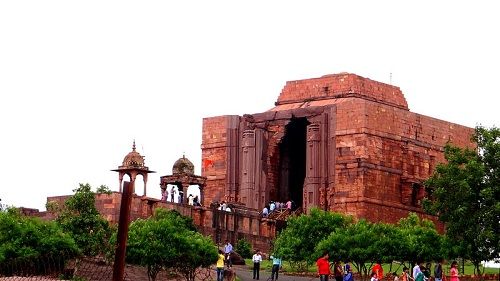 The Bhojeshwar Temple is an incomplete Hindu temple in Bhojpur village of Madhya Pradesh, India. Dedicated to Shiva, it houses a 7.5 feet (2.3 m) high lingam in its sanctum. The temple's construction is believed to have started in the 11th century, during the reign of the Paramara king Bhoja.

According to the Archaeological Survey of India (ASI), the Bhojpur temple has one of the tallest and grandest Shiva Lingams in India. And it’s built out of a single rock. How on earth would craftsman pull off such complex acts during that era is beyond me!

The Bhojpur temple is a commanding structure, mesmerising even….and one of the prettiest temples. It’s quite an accomplishment considering this temple is unfinished till date. The temple was apparently an ambitious project ahead of its time that was conceived by Raja Bhoj. Padmashri K.K.Muhammed explained that probably some error of calculation led to one of the last stones being laid on the ceiling falling on the Shiv Ling and damaging it. But owing to the massive size of the temple, ritual worship went on in the temple. The Bhojeshwar temple dedicated to Shiva (Indian god) or Bhojeśvara was built by Raja Bhoj of the Paramara dynasty that ruled the region of Malwa during that period during the 11th century. Raja Bhoj is believed to have been a great patron of art and architecture and the temple that he had commissioned had been envisaged as a massive temple complex, but sadly the temple was never completed.

Raja Bhoj built the Bhojpur temple around 1010-1055 AD but never completed it. Some say he shifted his focus and resources towards the Somnath temple that was being attacked by Mahmud of Ghazni…and then he passed away before he could complete the construction of this one. Others say that he wanted to build this temple in one day and so it remained incomplete after the day’s work. The latter, I highly doubt… but the locals are quite enthusiastic when they narrate this built-in-a-day story.

Perched on a small hillock with the quiet Betwa River on one side, the Bhojpur temple made for a spectacular view. Vast wheat fields added a soothing golden colour to the landscape. “The temple was constructed by Raja Bhoj in the year 1010, and at that same time temple construction activity was going on at Brihadishwara Temple in Tanjore”, explained the celebrated archaeologist Padmashri K.K.Muhammad. He was accompanying us on our exploration of the heritage of Madhya Pradesh under the aegis of the Times Passion Trails. We were fortunate to be visiting the famous Shiva temple with the man who led the team that restored the very temple in 2006-07.

“The temple was constructed by Raja Bhoj (Hindu) in the year 1010, and at that same time temple construction activity was going on at Brihadishwara Temple in Tanjore”, explained the celebrated archaeologist Padmashri K.K.Muhammad. He was accompanying us on our exploration of the heritage of Madhya Pradesh under the aegis of the Times Passion Trails. We were fortunate to be visiting the famous Shiva temple with the man who led the team that restored the very temple in 2006-07.

The temple was apparently an ambitious project ahead of its time that was conceived by Raja Bhoj. Padmashri K.K.Muhammed explained that probably some error of calculation led to one of the last stones being laid on the ceiling falling on the Shiv Ling and damaging it.

Raja Bhoja established the city of Bhojpur and is believed to have constructed hundreds of temples, accounts say that he built 104 temples in his capital city Dhar itself. The building spree of Raja Bhoja reminds one of Jayavarman VII who is known for building many of the famous temples of Siem Reap in Cambodia. But sadly, it is only the Bhojpur Lord Shiva temple that stands today and can be attributed to him. However Raja Bhoja did not build temples alone, he is credited with public works including water reservoirs. Also, Raja Bhoja was not just a mere patron who encouraged art and architecture, he himself was well versed in these disciplines and is credited with the writing of a treatise of architecture and sculpture titled Samaranganasutradhara.

Raja Bhoj in a masterstroke of engineering had a huge reservoir extending over an area of 18.5 by 7.5 miles constructed. In an ingenious method, the surrounding hills were used as natural walls and a series of dams were built forging man-made lakes. The Bhojpur Shiva temple stood on the banks of a man-made lake. This was so for about 400 years, when Sultan Hoshang Shah, breached the walls of two dams and had the waters of the lake emptied. The remains of a dam can still be seen towards the north of the Shiva temple. The dam over the Betwa river which was made of earth and covered with stone slabs was 98 feet in height and had a thickness of about 300 feet at the base which tapered to 164 feet towards the top.

It is believed by historians that given the colossal scale of construction of the Shiva temple, the dams, and the architectural homogeneity, these works could have been undertaken by a king who ruled over a considerable period over the region. Similiar characteristics of architecture and masonry marks are found in the Bhojpur Jain temple also and in fact, an inscription at the Bhojpur Jain temple mentions Raja Bhoja. All these facts together point towards Raja Bhoja establishing Bhojpur and carrying on his construction activity with zeal in the region.

The best time to visit Bhojpur temple is from October through March when the temperatures are agreeable.

The temple itself stands on a huge platform reached by climbing a steep flight of steps. You feel dwarfed as you stand in front of the huge temple. Conspicuously there is no Mandapa connecting to the Garba Griha or Sanctum Sanctorum. One enters directly into the Garba Griha from a flight of steps. The rays of the setting sun strike the massive Shivling inside the sanctum which is in semi-darkness and it is a sight to behold with its massive flanks.

The architectural elegance of Bhojpur Shiva temple (Hindu god) comes across in spite of the fact that it is left unfinished and with bare external walls. One can only imagine how the temple would have looked, had the ambitious plans of Raja Bhoja seen the light of day.

Inside the sanctum, the Shivling dominates the space. at over 26 feet height it is one of the largest Shivlings in the country. There are four gigantic pillars inside the sanctum. A pillar that was missing was added by the ASI team lead by Padmashri K.K.Muhammed in 2006-07 as part of the restoration of the temple. It is interesting to note that that the pillar was carved from a single stone and every care was taken that it was close to the original. The 12-tonne pillar took about 6 months to install. One can only wonder how the other pillars that are estimated to weigh over 33 tonnes were erected during the 11th century!

Timing for Darshan at Bhojpur Temple: