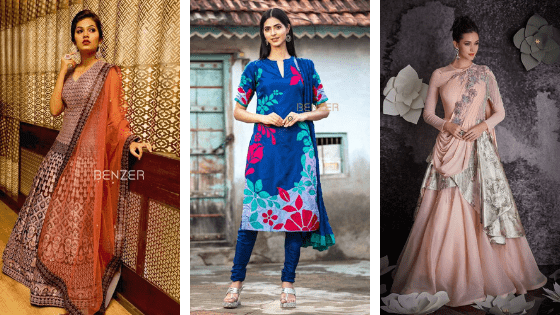 Traditional / Ethnic Wear may be defined as the ensemble of garments, jewelry, and accessories rooted in the past that is worn by an identifiable group of people. Ethnic /Traditional Wear in India varies from religion, region, and geography.

India is known for its diversity all over the globe and has a wide range of ethnic and cultural wear. The clothes changes as you pass by one state to another. Indian traditional wear is one of the most colorful and heavily embroidered dresses.

Traditional Indian Attire wear for men would be kurta, jodhpuri, sherwani, etc. and for women traditional are sarees, ghagra choli, lehenga, etc. India has a vast culture. If you visit Indian cities than you find that every next state, even the city has different cultures and traditions. If you are interested in Indian fashion or fashion enthusiast you sure have to visit in to try the best Indian traditional attires. Here is a list of top Ethnic Wear both for Men & Women.

Sarees are associated with grace and indubitably regarded as a symbol of Indian culture and is considered the top women's wear. It is typically wrapped around the waist, with one end draped over the shoulder, baring the midriff.

Lehenga or Ghagra choli is the perfect answer to your search for attire that adorns you for the quintessential Indian traditional/ethnic celebrations. A Ghagra Choli or a Bridal Lehenga is a must-have for all Indian weddings and the accompanying extravaganza. It's a perfect Ethnic Wear.

Anarkali suits have always complimented the eternal beauty of Indian women since the Mughal era when it comes to women's ethnic wear. The designer Anarkali dresses were revived in the 20th century by Madhubala and later in the 21st century by actresses like Madhuri Dixit and Aishwarya.

A Gown can well deservedly boast of being one of the most popular attires among evening wear. A Gown is applied to any full-length woman's garment consisting of a fitted bodice and an attached skirt.

Sherwani is the traditional wedding dress of groom that with time has become the most sophisticated in look and when it is worn with stole, bandhani pagri and mojris, the appeal of sherwani is just incomprehensible.

A Jodhpuri suit or Bandhgala jodhpuri suit is a formal suit from India. It originated in the Jodhpur State and was popularized during the British Raj in India.

The Pathani suit is a modern version of the Perahan turban. However, it has side slits and the sides of the perahan are cut like an arch. It also has collars and cuffed sleeves.

Kurta is a long top, generally of knee-length, paired with Churidar. Men usually wear a Kurta with Pajama for a classic look. Indian churidar kurtas are an inevitable part of traditional Indian clothing for men.