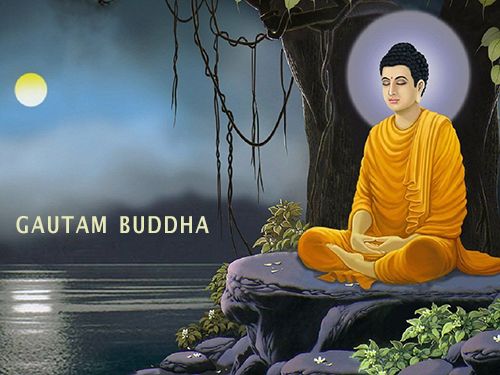 He was born in a region of what is now known as Nepal and was the person who created the religion of Buddhism. He lived from about 563 BC to about 483 BC. He is also called Shakyamuni Buddha because he was a member of the Śākyan clan, the ruling class of an aristocratic republic in that region.

Who Was Goutam Buddha..?

India at the time of the Buddha was very spiritually open. Every major philosophical view was present in society, and people expected spirituality to influence their daily lives in positive ways. At this time of great potential, Siddhartha Gautama, the future Buddha, was born into a royal family in what is now Nepal, close to the border with India. Growing up, the Buddha was exceptionally intelligent and compassionate. Tall, strong, and handsome, the Buddha belonged to the Warrior caste. It was predicted that he would become either a great king or spiritual leader. Since his parents wanted a powerful ruler for their kingdom, they tried to prevent Siddharta from seeing the unsatisfactory nature of the world. They surrounded him with every kind of pleasure. He was given five hundred attractive ladies and every opportunity for sports and excitement. He completely mastered the important combat training, even winning his wife, Yasodhara, in an archery contest.

An iconic figure of Sakyamuni Buddha is enough to perceive the grandeur of this historical leader who influenced the social and political frame of India. There was an unprecedented charm in Buddhist teachings and Buddhist philosophy, something that is as relevant then as it is now. If you haven’t got a chance, to read or learn about Buddha, this is your chance to know him and connect to him, the way you have not thought so far. Stay with us, as we take you in the life of one of the most influential people in the world that walked on the face of the earth in millions of years.

Buddhacarita which is the earliest biography and is also an epic poem written by the famous poet Asvaghosa in the 1st century CE. The Lalitavistara Sūtra is the next oldest biography on Gautam Buddha, it dates back to the 3rd century CE.The Mahavastu from the Mahasamghika Lokottaravāda tradition is another major biography which was probably composed in 4th century CE.The exhaustive Dharmaguptaka biography of the Buddha is entitled the Abhiniskramana Sutra, and one can also find several Chinese translations of this dating between the 3rd and 6th century CE. The last composition, Nidanakatha by Buddhaghoṣa is from the Theravada tradition in Sri Lanka and dates back to the 5th century.