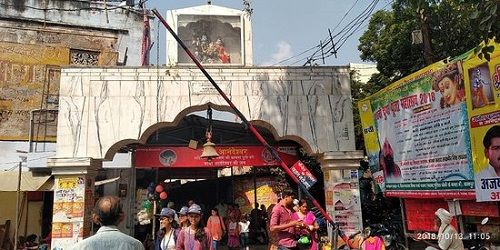 Anandeshwar temple is a famous temple of Lord Shiva situated at a distance of 5. 4 Kms from Kanpur. The temple is 500 years old and is one of the oldest temples of Kanpur. Anandeshwar Shiva Temple in India is also known as Baba Anandeshwar Mandir and also a very famous ancient temple located on the banks of the Ganga River in the city of Kanpur, where the thousands of visitors visit to Anandeshwar Shiva Temple to take the blessing of the Lord Shiva. The voices of Bam-Bam Bhole's cheers can be heard even from a far. Devotees are desperate just to have a glimpse of Baba Shiva. Baba is being anointed with milk and Ganga water.

The temple is 500 years old and is one of the oldest hindu temple of Kanpur. This temple was built during the 16th century. There is a shivalinga facing north, and there are several idols of Hindu Gods which include Goddess Kali, Goddess Parvati, Goddess Annapurna, Lord Ganesha, Kaal Bhairav and Lord Kartik. There is silver pitcher tied above the Shivalinga that lets the drops of Ganga Jal fall on Shivalinga. This place is one of its kinds due to the presence of a natural Shivaling. Anandeshwar Shiva Temple, there are many attrative Architecture on the Temple and the Ganga River in the temple. The temple houses a lot of bells in its precincts and the sanctum sanctorum is airy with a total of 12 windows in it. It is one of the most visited pilgrim places of Kanpur. It is during the Shravan period primarily on the first Monday that the devotees visit this place to offer water, milk, honey, and fruits to the Shiv Ling. The Anandeshwar Shiva temple remains crowded during that time. Festival of Shiv Ratri is the most celebrated festival in the temple.

Anandeshwar Shiva Temple is a very famous Shiva temple of Kanpur. To reach Anandeshwar Temple all the public Transport are available in Kanpur.

You can travel by the Train, Kanpur Central is the main railway station at a distance of approximately 5 kilometres from Anandeshwar Temple.

The Best Time to visit the Anandeahwar Temple in the month of October to March or you can visit in Mahashivratri and Shravan festivals, Many people visit to Anandeshwar Shiva Temple to celebrate the festivals.

The currency on Lord Ram in Holland a European Nation