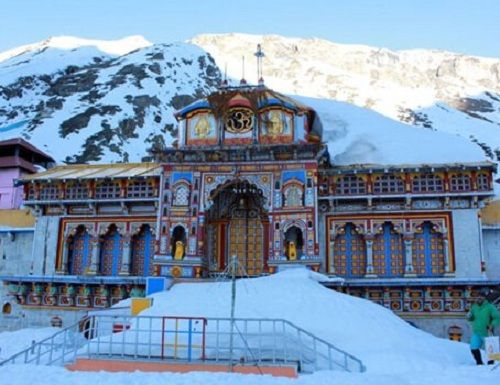 Badrinath or Badrinarayan Temple is a Hindu temple dedicated to Lord Vishnu which is situated in the town of Badrinath in Uttarakhand, India.

The Badrinath area is referred to as Badari or Badarikaashram (बदरिकाश्रम) in Hindu scriptures. It is a place sacred to Vishnu, particularly in Vishnu's dual form of Nara-Narayana. Thus, in the Mahabharata, Krishna, addressing Arjuna, says, "Thou wast Nara in a former body, and, with Narayana for thy companion, didst perform dreadful austerity at Badari for many myriads of years.

One legend has it that when the goddess Ganga was requested to descend to earth to help suffering humanity on the request of Suryavanshi king Bhagiratha, the earth was unable to withstand the force of her descent. Therefore, the mighty Ganga (Ganges) was split into two holy channels, with Alaknanda one of them. Another legend explains both name and sitting posture as this place was full of Badri bushes and Vishnu meditating for, beloved Lakshmi stood next to him sheltering him from scorching sunlight turned into a Badri herself called 'BADRI VISHAL' and her lord (Nath) became the BadriNath.

Devotees worship several murtis in the temple, the most important a one meter tall statue of Vishnu as Lord Badrinarayan made of black Saligram stone. Many Hindus consider the statue one of eight swayam vyakta keshtras, or self-manifested statues of Vishnu. The murti depicts Vishnu sitting in meditative posture, rather than His far more typical reclining pose. In November each year, when the town of Badrinath closes, devotees move the image to nearby Jyotirmath.

Summer season is the ideal time to visit this place. The peak season to visit this place is between May to June and September to October. With the onset of the Monsoon season, Badrinath witnesses heavy rainfall and a drop in temperature. Winters here are extremely cold due to heavy snowfall. Mostly in winters, the temperatures touch the sub-zero level, making the climate too frosty.

Around 4.30 am with maha abhishek and abhishek puja, and end at around 8.30 -9 pm with the shayan aarti.

Timing for Darshan at Badrinath Temple:

The temple opens for darshan for the general public around 7-8 am and there is an afternoon recess between 1-4 pm. The Rawal of the temple performs the rituals.

The Badrinath temple is the main attraction in the town. According to legend Shankar discovered a black stone image of Lord Badrinarayan made of Saligram stone in the Alaknanda River. He originally enshrined it in a cave near the Tapt Kund hot springs.

The mountains around Badrinath are mentioned in the Mahabharata, when the Pandavas were said to have expired one by one, when ascending the slopes of a peak in western Garhwal called Swargarohini (literal meaning - the 'Ascent to Heaven'). The Pandavas passed through Badrinath and the town of Mana, 4 km north of Badrinath, on their way to Svarga (heaven). There is also a cave in Mana where Vyasa, according to legend, wrote the Mahabharata.

Located on the Garhwal Himalayan range near the Mandakini river, In the state of Uttarakhand