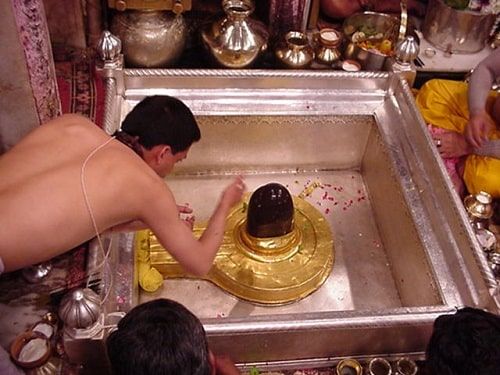 Baba Kashi Vishwanath temple is one of the highly revered shrines of God Shiva. Located in the Worlds Oldest city of Varanasi, Vishwanath Temple rests on the western banks of Ganges. Varanasi is a small city in the northern state of Uttar Pradesh in India. With 3500 years of documented history, this holy city is acclaimed to be the oldest living city in the world. Earlier, Varanasi used to be known as Kashi, perhaps this is the reason the shrine is popular as Kashi Vishwanath.

Vishwanath Mandir is known for comprising one of the twelve Jyotirlingas (Linga of light) of Lord Shiva. The presiding deity is known as Vishwanath or Vishweshwara, suggesting the "ruler of the world". In the sanctum sanctorum, the holy 'jyotirlingam' is placed in a silver alter. This sacred 'Lingam' of Lord Shiva captures the main devotional focus of Varanasi. Thousands of devotees and pilgrims come of offer their obeisance to Lord Shiva.

According to the documents written by legends, the temple has been mentioned in the Puranas including the Kashi Khanda of Skanda Purana. The original Vishwanath temple was destroyed by the arbi Muslim army of Qutb-ud-din Aibak in 1194 CE when he defeated the Raja of Kannauj. Baba Kashi Vishwanath temple has been rebuilt several times over the past few centuries. The present temple was built in 1780 CE by Rani Ahalyabai Holkar of Indore after Mughal emperor Aurangzeb destroyed the previous Baba Vishwanath temple you can read Kashi Vishwanath Temple Break History and built a mosque at the site (now adjacent to it), which is called as Gyanvapi Mosque. A Naubatkhana was built in front of the temple by Collector Mohammad Ibrahim Khan in 1785. The two beautiful domes of the temple were covered with gold donated by Punjab Kesari Maharaja Ranjeet Singh in 1839. The management of the temple was taken under UP Government in 1983.

The temple complex consists of a series of smaller shrines, located in a small lane called Vishwanatha Gali. The main Shiva Linga of the temple is 60 cm tall and 90 cm in circumference and is enshrined in a silver altar. There are small temples for Kaalbhairav, Dhandapani, Avimukteshwara, Vishnu, Vinayaka, Sanishwara, Virupaksha, and Virupaksha Gauri. There is a small well in the temple called the Gyanvapi (the wisdom well) and it is said that the main priest of the temple had jumped in the well with the Shiva Linga in order to protect the lord from the invaders.

Mahashivratri and Dev Deepawali are the major festivals celebrated at Kashi Vishwanath Temple. Being the most famous Shiva temple India, the temple witnesses around 3,000 devotees on a daily basis and the footfall increases to 100,000 on special occasions.

Advantages of Conducting SEO for your eCommerce Site

Choose Modern Carpets Designs for Your Home Floors in 2022