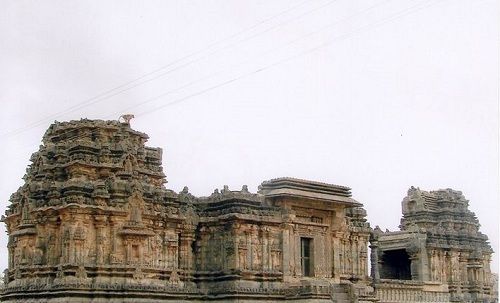 Kasivisvesvara, Lord Shiva towards east and Suryanarayana facing west, the temple has a unique plan. The Shiva linga is around three feet high from the sanctum and the Sun God faces west which is different from other Sun temples. The temple has very sharper and crispier stone plans and with perfect light and dark shades to the stone works.  The arches, moldings and lintels and door jambs have enough carvings that depict the exemplary architecture of the Chalukyan era.

The temple also has some mini towers which were Shrines or the deities depicting the influence of the architecture in northern India. The doorstep moldings and the doorways contain impeccable work of art and presentations that keep the art lovers busy. The pillars also contain many sculptures and artworks. The Kasivisvesvara Temple is one of the many beautiful temples in and around Gadag that bear testimony to the architectural achievements of the Western Chalukya Dynasty. They developed their own unique style which departed a little from the extant Dravidian style and incorporated ideas from contemporary North Indian Temple construction.

The Kasivisvesvara Temple is a remarkable example of the Kalyani Chalukya school of architecture. This temple is a Dvikuta that is it has two shrines. The Kasivisvesvara Temple shows evidence of inspiration derived from contemporary North Indian Sekhari and Bhumija styles. The doorpost moldings of the southern doorway are covered in nice scrollwork. On either side of the doorway stand pilasters. The lintel of the doorway carries a figure of Gajalakshmi. This feature is a trademark of the architecture of this region. The Kasivisvesvara Temple is dedicated to Lord Shiva. The main deity is Lord Shiva in the form of a Shiva Linga. The other shrine is dedicated to Surya, in the aspect of Surya Narayana. He is depicted seated on a chariot drawn by seven horses.

The most famous temple in Lakkundi is the Kasivisvesvara temple built in the 11th century. The Chalukyas were known for combining the decorations and architectural aspects and is said to have evolved their own style of architecture. This is clearly evident in the Kasivisvesvara temple (Hindu Temple). The temple is highly decorated with detailed carvings Here you can see a mixture of north Indian architecture such as the wide lotus petals carved on rectangular bases and topped with an array of intricate carvings of elephants.

The existence of a 1087 CE inscription on a beam in the temple mantapa (hall) and the plainness of that part of the temple suggests that the original construction may have been simpler and that the profusion of decoration may have been added to the other parts of the temple at a later period, with the end of Chola invasions of Chalukyan territory. Most of the inscriptions in Lakkundi date from 1170 CE onwards. It is known that Hoysala king Veera Ballala II annexed Lakkundi (also known as Lokkigundi) from the Seunas of Devagiri and made it his capital around 1193 CE. It is possible that the temple may have received embellishment during his rule. This is a double shrined temple (dvikuta). The shrine facing east is dedicated to Kasivisvesvara (Hindu god Shiva) whose universal symbol, a linga, stands three feet tall in the sanctum. The other shrine, which faces the main shrine is dedicated to the sun god Surya and is called Suryanarayana. The Surya shrine faces west, an unusual occurrence among Surya temples, which normally face east.

The Kasivisvesvara temple epitomises the shift in Chalukyan artistic achievements, towards sharper and crisper stone work not seen in earlier constructions, taking full advantage of the effect of light and shade. Special attention was paid to mouldings, arches and other details on the tower, and decorations on doorjambs and lintels.

October to February is the Best time to visit the Kasivisvesvara temple. On the month of May the festivals are celebrated nicely.

The details on each wall, is sure to leave you awestruck. Almost every wall has sculptures that depict dancers, musicians, cherubs, animals etc. They look so stunningly intricate that you are left to wonder about the advancement of the people of that era. Another attractive feature is the unusual style displayed in the construction of the temples tower. The successive storeys are linked with trefoil arches, a style that is not seen elsewhere. The main attraction will most definitely be the richly carved, black pillars so polished that you can actually see your inverted reflection on it!

Another major attraction is the Brahma Jinalaya. Built around the 1007 AD, it is one of the oldest temples in Lakkundi.

Timing for Darshan at Kasivisvesvara Temple:

Kasivisvesvara temple is located in Lakkundi, in the (Gadag district) of Karnataka state.