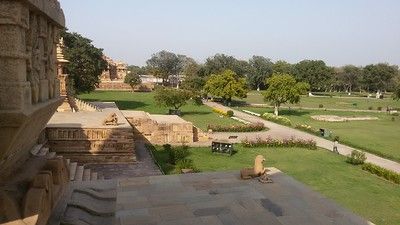 Everything About Matangeshwar Mahadev

The Matangeshwar Mahadev Temple of Khajuraho is nothing short of a great surprise. There is a huge Shivling in this temple, which is two and a half meters high and one meter in diameter. It is believed that this Shivling is as much above the ground as it is under the ground. It is said that Shiva and Parvati married in this temple. Because of which this temple is considered a symbol of the holy love of Adi Dev and Adishakti.

Located near the Lakshmana temple, this temple is in a 35 feet square radius. Its sanctum is also square. The entrance is to the east. The shikhara of the temple is multi-storey. Its construction period is believed to be around 900 to 925 AD. This temple was constructed during the reign of Chandela ruler Harshadeva.
The sanctum sanctorum of the temple has a huge Shivling which is 8.5 feet high. Its enclosure is about 4 feet. This Shivling is also known by the name of Mrityunjay Mahadev.

As much as outside

It is said about this Shivling that more than this Shivling appears above the ground, it is also suppressed in the ground. People say that King Chandradev had found a emerald gem for the protection of his kingdom, which is buried under this Shivling.

The upper part of the pillars of the temple is sometimes decorated with bell boots. This is the only temple of Khajuraho, whose shape has been continuously worshiped for centuries. The Arab traveler Ibn Battuta also writes about the temple that there was worship here.

Matang means God of Love - People here also believe that Khajuraho is the place where Lord Shiva was married to Goddess Parvati. Matangeshwar is also a god of love. This temple is considered the most sacred of all the temples of Khajuraho.