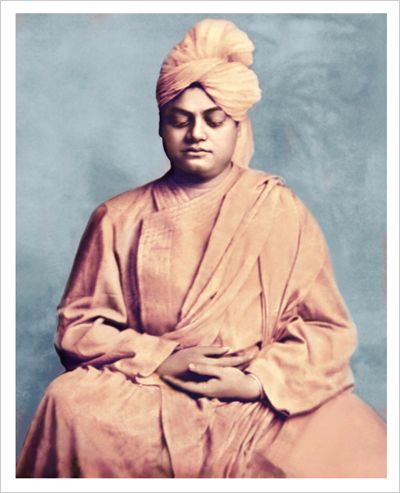 Sri Ramakrishna was born on 18 February 1836, in the village of Kamarpukur, in the Hooghly district of West Bengal, India, into a very poor, pious, and orthodox Brahmin family. Kamarpukur was untouched by the glamour of the city and contained rice fields, tall palms, royal banyans, a few lakes, and two cremation grounds. His parents were Khudiram Chattopadhyay and Chandramani Devi. According to his followers, Sri Ramakrishna's parents experienced supernatural incidents and visions before his birth. In Gaya his father Khudiram had a dream in which Bhagwan Gadadhara (a form of Vishnu), said that he would be born as his son. Chandramani Devi is said to have had a vision of light entering her womb from (Yogider Shiv Mandir) Shiva's temple.

The family was devoted to Hindu God Rama, and male children of Khudiram and Chandramani were given names that started with Ram or Rama: Ramkumar, Rameswar, and Ramakrishna.There has been some dispute about the origin of the name Ramakrishna, but there is "...evidence which proves beyond doubt that the name 'Ramakrishna' was given to him by his father..." Ramakrishna confirmed this himself, as recorded in "M"s diaries, "I was a pet child of my father. He used to call me Ramakrishnababu."

Swami Vivekananda's inspiring personality was well known both in India and in America during the last decade of the nineteenth century and the first decade of the twentieth. The unknown monk of India suddenly leapt into fame at the Parliament of Religions held in Chicago in 1893, at which he represented Hinduism. His vast knowledge of Eastern and Western culture as well as his deep spiritual insight, fervid eloquence, brilliant conversation, broad human sympathy, colourful personality, and handsome figure made an irresistible appeal to the many types of Americans who came in contact with him. People who saw or heard Vivekananda even once still cherish his memory after a lapse of more than half a century.

Also Narendra Modi is a follower of Swami Vivekananda which shows in his shared ideologies with Swami Vivekananda who had given the concept of ‘One Asia.’ He said that the solutions to the world’s problems will come from Asia. Today, the world says 21st century is Asia’s century.

Asia has the potential to solve the world’s problems. We should look at his ideas in today’s concept.

Identity: It was Swami Vivekananda who gave to Hinduism as a whole a clear-cut identity, a distinct profile. Before Swamiji came Hinduism was a loose confederation of many different sects. Swamiji was the first religious leader to speak about the common bases of Hinduism and the common ground of all sects. He was the first person, as guided by his Master Sri Ramakrishna, to accept all Hindu doctrines and the views of all Hindu philosophers and sects as different aspects of one total view of Reality and way of life known as Hinduism. Speaking about Swamiji’s role in giving Hinduism its distinct identity, Sister Nivedita wrote: “… it may be said that when he began to speak it was of ‘the religious ideas of the Hindus’, but when he ended, Hinduism had been created.”

Unification: Before Swamiji came, there was a lot of quarrel and competition among the various sects of Hinduism. Similarly, the protagonists of different systems and schools of philosophy were claiming their views to be the only true and valid ones. By applying Sri Ramakrishna’s doctrine of Harmony (Samanvaya) Swamiji brought about an overall unification of Hinduism on the basis of the principle of unity in diversity. Speaking about Swamiji’s role in this field K M Pannikar, the eminent historian and diplomat, wrote: “This new Shankaracharya may well be claimed to be a unifier of Hindu ideology.”

Defence: Another important service rendered by Swamiji was to raise his voice in defence of Hinduism. In fact, this was one of the main types of work he did in the West. Christian missionary propaganda had given a wrong understanding of Hinduism and India in Western minds. Swamiji had to face a lot of opposition in his attempts to defend Hinduism.

Meeting the Challenges: At the end of the 19th century, India in general, and Hinduism in particular, faced grave challenges from Western materialistic life, the ideas of Western free society, and the proselytizing activities of Christians. Vivekananda met these challenges by integrating the best elements of Western culture in Hindu culture.

New Ideal of Monasticism: A major contribution of Vivekananda to Hinduism is the rejuvenation and modernization of monasticism. In this new monastic ideal, followed in the Ramakrishna Order, the ancient principles of renunciation and God realization are combined with service to God in man (Shiva jnane jiva seva). Vivekananda elevated social service to the status of divine service.

Refurbishing of Hindu Philosophy and Religious Doctrines: Vivekananda did not merely interpret ancient Hindu scriptures and philosophical ideas in terms of modern thought. He also added several illuminating original concepts based on his own transcendental experiences and vision of the future. This, however, needs a detailed study of Hindu philosophy which cannot be attempted here.

What does a Carpenter do?