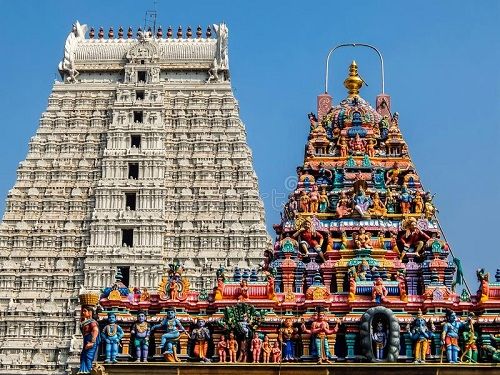 Arunachalesvara Temple, is a Hindu temple dedicated to the deity Shiva, located at the base of Arunachala hill in the town of Thiruvannamalai in Tamil Nadu, India. Shiva is known by devotees as Annamalayar or Arunachaleswarar. And this is believed to be the largest temple in the world dedicated to Shiva. Annamalaiyar Temple, a breathtaking temple dedicated to Lord Shiva, is located in the bustling town of Thiruvannamalai, at the base of Annamalai Hills in the South Indian state of Tamil Nadu. As you walk closer to the grand temple complex, you'll notice how marvellously the structures have been built. This 25-acre complex is sure to mesmerize you with its beauty and elegance.

There are numerous intricately adorned shrines and halls within the entire temple complex which is also considered as one of the largest temple complexes in India. Do make it a point to see the splendid eastern gopuram (tower), which is one the tallest temple towers in India as it stands 66 metres tall and the gorgeous thousand-pillared hall that extends serenely in the temple complex.

The history of this Annamalayar temple dates back to thousand years. Bramha took the form of a swan and flew to see the crown of Lord Shiva. Unable to see the crown, Bramha saw a thazhambu flower which had decked Siva's crown falling down. He asked the flower as to the distance of Siva's crown whereby the flower replied that he had been falling for forty thousand years. Bramha, realizing that he would not be able to reach the crown asked the flower to act as a false witness.

The thazhambu flower acting as a false witness declared that Brahma had seen the crown. Siva became angry at the deception and cursed that Bramha should have no temple on earth and that the thazhambu flower should not be used while praying to Lord Siva. The place where Lord Siva stood as a column of fire to eliminate the ego is Thiruvannamalai.

The Saiva cult is a world phenomenon. Thiruvannamalai is the capital of Saivism. The South Indian deity Siva is the God of all countries. Annamalaiannal is the most sacred of the names of the manifestation of Lord Siva.

The Annamalaiyar Temple is considered as one of the temples associated with the Agni or Fire element of the Pancha Bhoota Stalas or the five elements and is significant to the Hindu sect of Shaivism. The priests perform the temple rituals very stringently six times a day and are always punctual. In the region, Lord Shiva is also known as Annamalaiyar or Arunachaleswarar. His idol is referred to as Agni Lingam and Goddess Parvati (Indian god)  is referred to as Unnamalai Amman.

The best time to travel Annamalaiyar Temple is between November and March as the temperature is pleasant for exploring the region. Celebrated in the Tamil months of Karthikai (between November and December). Every Full Moon, believers worship Annamalaiyar by barefoot circumambulation of Annamalai Hill which is a distance of 14 kilometres. It is believed that this act frees one of their shackles and pardons their sins.

Believers visit the temple for religious purposes and for offering prayers to the deities. It is said that visiting this temple and offering prayers with a clean heart will absolve one's sins. It is here that many Sages and Maharishis have attained salvation in the past and it is here that one should come to experience at least a moment of peace in today's fast-paced world.

Puja here at the Annamalaiyar Temple is done six times every day.

Timing for Darshan at Annamalaiyar Temple:

Located at the base of Arunachala hill in the town of Thiruvannamalai in Tamil Nadu, India.

Factors to Consider When Applying For Truck Finance Australia