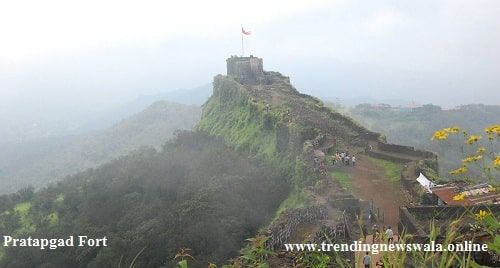 Everything About Pratapgad Fort

This historic Pratapgad Forts In Maharashtra is a mountain fort built by Chatrapati Shivaji Maharaj. The fort is at a distance of 24 km from the hill station of Mahabaleshwar and is a great easy trek for all trekkers and adventure lovers. The fort holds a sturdy view of coastal Konkan. The Bhavani Temple and Afzal Khan’s tomb are other places of interest.

Pratapgad consists of two forts – an upper fort built on the top of the hill and a lower fort immediately below on the south and the east. Surrounding areas can be easily taken guard from the fort on almost all sides. The southern side is rocky while the eastern side has a strong outwork ending in the Afzal Buruj.

The famous minister More Tirmal Pingale on the command of Shivaji Maharaj to control the rebellious satraps of the surrounding Javali Basin built Pratapgad Fort in 1656. It is believed that Chatrapati Shivaji Maharaja was blessed with a shining sword at the temple of Goddess Bhavani here.
The historic battle between Chatrapati Shivaji and Afzal Khan, the commander of the Bijapur Sultanate fought here. Bhavani Temple and Afzal Khan’s Tomb are major attractions where are situated near the fort.

Everything About Daulatabad Fort Aurangabad

Everything About Raigad Fort