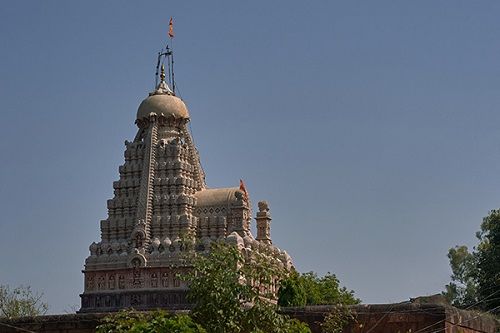 Grishneshwar Temple is Located in the Aurangabad, Maharashtra. Grishneshwar Temple dedicated to Lord Shiva is one of the holiest Hindu pilgrimage sites in India. Located about 35 km away from the city of Aurangabad, it is home to the 12th and the last Jyotirlinga on earth. It is an ancient shrine that finds mention in the Shiva Puran, one of the sacred scriptures in Hinduism. The Grishneshwar temple was re-constructed by Maloji Bhosale, (grandfather of Shivaji) in the 16th century and later again by queen Ahilyabai Holkar in the 18th century. The Grishneshwar Shiva Temple in India, built of red rocks and it is composed of a five-tier Shakira.

The Grishneshwar temple is an illustration of Maratha temple architectural style and structure. The Grishneshwar Shiva Temple, is built by Maloji Bhosale, (Grandfather of Shivaji) in the 16th century to 18th century. The Temple built of red rocks and it is composed of a five-tier shikara. The temple measures 240 feet x 185 feet, which makes it the smallest of all the 12 Jyotirlingas in India. The Grishneshwar  temple complex is a court hall and a sculpture of Nandi, Lord Shiva’s bull. Carved images of Lord Shiva and Lord Vishnu can also be seen in the temple. The shrine houses the revered Shiva Linga that faces eastward. Today, the Grishneshwar Temple is a major destination for tourists visiting Aurangabad and a pilgrimage site for Shiva devotees.

How To Reach Grishneshwar Temple

The nearest railway station to visit Grishneshwar temple is at Aurangabad (29 km).

The best time to visit the Grishneshwar Temple, During this month not only the weather is very pleasant, but it is also the time for Ellora Festival of Classical Dance and Music. Otherwise, January to March and October to December are the preferred months to visit the temple or you can visit in Mahashivratri festival in the temple.