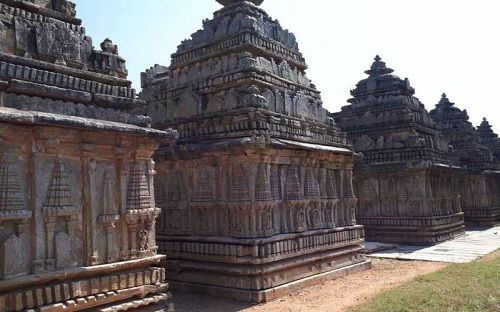 The Panchalingeshwara Temple situated at Govindanahalli which is about 4 kms from Kikkeri is another classical example of Hoysala art by the famous sculptor Ruvari Mallitamma.

The temple is facing East direction and the whole Hindu temple complex runs parallel to North South Direction with each kuta facing East Direction. There are two Sukhanasi entrance to the temple and each of the these sukhanasi's house the Nandi which are beautifully carved. The Dwarapalakas at the entrance are with notable workmanship and resemble the Dwarapalakas present at Halebeedu but smaller in scale.

The entire wall facing the East is decorated with perforation so that there is enought lighting within the temple complex. As we enter the temple, we can find three Nandi's present inside the temple and five Lingas. Apart from the Lingas, one can find the entire family of Lord Shiva with Parvathi, Subramanya and Ganesha on the doorway of Sri.Agoreshwara diety. On the outer walls of the Garbha Griha one can find Ganesha, Mahishasura Mardhini, Shiva Parvathi idol housed in smaller Gopuras and each of these Gopuras are of different shape and size.

Also one can find the twin snakes, the male snake bearing seven heads and the female snake bearing five heads, this is quite unique as this kind of pair is available only here. The other pair is at Aralaguppe with 5 heads for male and 3 heads for female. Starting the pradakshina around the temple, one can see the Dashavathara of Vishnu being sculpted on the upper railings with Mandakini figures being carved on the junction between the pillar and wall.

The other notable idols around the temple are the Vishnu Avataras, Shiva, Parvathi, Brahma, Ganesha and the dancing Saraswathi is extremely rare to spot in the Hoysala temples. One can also note the various Gopuras being sculpted around the temple and each Gopura is unique and there is no repetition at all. The view of the temple from the North West Corner and North East Corner is the best to get the view of Pancha Kuta.

This temple is constructed directly on the ground without the pedestal and one can clearly identify that the last Kuta was added at the fag end of the construction or after the temple was completed, hence, this temple shows a very clear disimilarity of the last kuta when compared to the former four kutas. The differences are in the size of the pillars, the front wall, the distance between the kutas and the stone itself used for the construction.

The Vamadeva, Thatpurusha, Aghora, Sadyojatha and Ishana are the five lingas present in the temple. Lord Shiva is the embodiment of all these pancha (five) features. Historians have researched and found out that the credit of creating the temple goes to the Pandavas. The Hegde dynasty worships the Panchalingeshwara and it is supposed to be the kuladeva (chief deity) of the Hegdes. The temple dates back to as early as 7-8 AD and it is presumed that it has undergone many levels of renovation, without making any major changes to the architectural heritage and beauty.

Legend says that the temple has its major contributions from the known sculptors of Hoysala time, Ruvari Mallitamma and the temple was built by the Hoysala king Veera Someshwara in the 13th century. The temple initially had four shrines and was built in the Dravidian style, however, another shrine was added to it facing east to bring it under the Panchakuta architectural style. The uniqueness of the Panchalingeshwara temple at Mandya is such that, it does not have a platform which is a signature style of the Hoysala architecture. The temple has five Shiva Lingas named the Ishanyeshwara, the Tatpurusheshwara, the Aghoreshwara, the Vamadeveshwara and the Sadyojateshwara and the same is linked to the Pandavas from the epic Mahabharata (Indian God).

The best time to visit Panchalingeswar Temple is from the months of October to March, which is the winter season.

This temple is constructed directly on the ground without the pedestal and one can clearly identify that the last Kuta was added at the fag end of the construction or after the temple was completed, hence, this temple shows a very clear disimilarity of the last kuta when compared to the former four kutas. The differences are in the size of the pillars, the front wall, the distance between the kutas and the stone itself used for the construction. This beautiful temple has rare architectural beauty and magnificence. It consists of a three tiered roof and the shape is like that of a back of an elephant. The Hoysala style is clearly reflected in the temple architecture and the credit for sculpting this goes to none other than Ruvari Mallitamma. The Gopuras of the temple vary in their design, size and shape.

Perfect for both. A religious place as well as a place for nature lovers. Over all the temple is very attractive to look at and one can spend quality time going around it.

Timing for Darshan at Panchalingeshwara Temple: