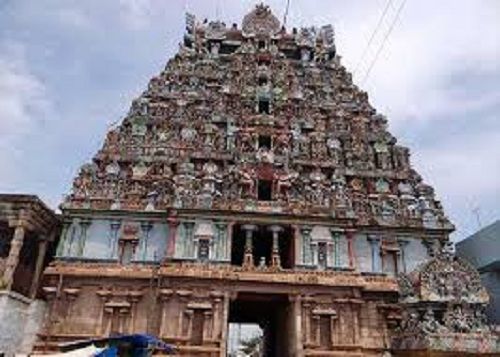 Jambukeswarar Temple, Thiruvanaikaval (also Thiruvanaikal, Jambukeswaram) is a famous Shiva temple in Tiruchirapalli (Trichy) district, in the state of Tamil Nadu, India. The temple was built by Maaravarman Sundharapandi I, a pandiyan king, around 800 years ago. Though it is speculated that Kocengannan (Kochenga Chola), one of the Early Cholas, to have built this temple, there is no evidence to support it. It is located in the Srirangam island, which has the famous Ranganathaswamy temple (Hindu temple).

Thiruvanaikal is one of the five major Shiva Temples of Tamil Nadu (Pancha Bhoota Stalam) representing the Mahābhūta or five great elements; this temple represents the element of water, or neer in Tamil. The sanctum of Jambukeswara has an underground water stream and in spite of pumping water out, it is always filled with water.

It is one of the 275 Paadal Petra Sthalams, where all the four most revered Nayanars (Saivite Saints) have sung glories of the deity in this temple. The temple has inscriptions from the Chola period.

This temple is situated in Coromandel between two rivers, Cauvery in south, coleroon in North. It is one of the five element shrines or Pancha Bootha sthalams and is renowned for the worship of lord Shiva (Indian god) as representing the element of water (appulinga).

As an Elephant was blessed here after worshipping here, this temple came to be known as ‘Thiruvanaikka’. As Lord Shiva is seated below Jambu tree at this temple, it got its name Jambukeswaram. When Goddess Ahilandeswari penanced here, Lord Shiva (Hindu god) satisfied by her prayer blessed her. For this reason this temple is also known as Gnanashethram.

This temple is endowed with 5 praharams.(corridor) As lord Siva himself built the 5th praharam, appearing in the form of Spider, it is known as ‘Thiruneettan thirumathil’. It is here lord Siva blessed a spider and elephant to attain moksha.

Monolithic stone pillars (made from single stone) are found in the mandapam, situated at the entrance of Aariyavittan tower in 3rd Praharam. Stone chains and 12 zodiac signs are beautifully carved on these pillars. Pillars found in 1000 pillar hall and in various parts of temple have artistic sculptural works. Temple cars In the year1910, 2 big temple cars were made for god & goddess. ‘Coratham’(used for procession) and several wooden Vahanas are present in this temple. Inscriptions 156 Inscriptions have been found at this temple. Inscriptions of King Madurai konda Parakesari varman paranthaka cholan is the oldest among them. Informations about renovations and wealth of this temple are found in these inscriptions.

Although it extends from October till February, there are intermittent rains in November and December. But the best time to visit Jambukeswarar Temple is during the winter months, especially for sightseeing and exploring the cities.

Devotees worshipping here are blessed both in this birth and in next birth.One who worships Goddess Ahilandeswari will be blessed with good education and intelligence, marrige and wishes for child are fulfilled. By coming around the fifth divine wall known as "Thiruneetran thirumathil one with gets fulfilled.

This is in the South West corner of the 4th praharam. Just opposite to the 1000 pillar mandapam. This Tank is architecturally beautifully built with two stories of Mandapams around the tank. Each mandapam built with 100 pillars. “Theppam” festival is celebrated in this tank in the Tamil month “Aadi” on “Pooram” day (the day when the star is Pooram, which is the star of Akilandeswari).

Timing for Darshan at Jambukeswarar Temple: