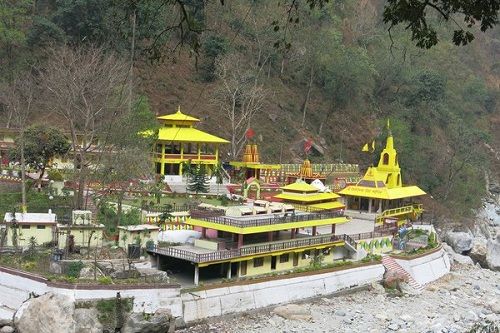 On the left banks of the river Rangit is a Shiva temple known as the Kirateshwar Mahadev Mandir, which has many mythological episodes of the Mahabharata attached to it. The main festival of the temple, Bala Chaturdesi is observed in December each year. Other temples dedicated to Lord Rama and Durga are also found here making it an important pilgrimage destination for Hindus. There is a Dharamshala next to the Shiva temple.

Positioned amidst emerald forests and on the edges of the glittering River Rangit, Kirateshwar Mahadev Temple is a renowned Hindu pilgrimage site. It is said, that whoever prays at this temple, all his wishes come true if you pray whole-heartedly. However, the temple is also widely visited because the premises houses three separate platforms to pray to Goddess Durga (Indian god), Lord Rama and Lord Shiva. It is said that Kirateshwar Mahadev is the oldest temple in the state. This sacred temple is also mentioned in the Mahabharata because of its vital role in the epic battle.

Kirateshwar Mahadeva Temple is pre-dominantly dedicated to Lord Shiva. Three deities are worshipped within the compounds of this temple. Lord Shiva (Hindu god) is the sole deity worshiped inside the main sanctum. There are two other beautiful shrines that contain idols of Goddess Durga and Lord Rama.

This temple is mentioned in many tales of Lord Shiva and the Mahabharata. The deity of this temple is named the destroyer and is considered to be the most fascinating and powerful deity of Hindu trinity. The deity has one thousand eight names and is mostly worshipped as a lingam. The idol is carved from stone and is in the form of a lingam.

As per the Hindu mythology, lord Shiva pleased with Arjuna's hard penance and devotion, appeared before him in the place where the temple lies as hunter Kirateshwar or Lord of the Kiratas. Lord Shiva blessed him with the success in the War of Mahabharata. Some people miraculously found a stone manifesting Shivlinga long back in that holy place. Local devotees say, ShivLinga is the main deity of worship. Many people also believe that a meagre visit with true devotion to this temple fulfils one’s wishes, particularly a wish for a child (a son or a daughter).

This temple was built in the memory of Lord Shiva in the heart of Legs ship centuries ago, which is thought to be the gateway for West Sikkim. The construction of the temple has that the story of its origin got lost in the course of time. There are separate platforms for the various deities where devotees can give their offerings. This temple is said to be the oldest temple in the state among the numerous temples in Sikkim. Even without any major festival the temple compound is always full of loyal devotees who come to pray in front of the unique idol of Lord Shiva. It is said that Mahadeva emerged from that same stone.

The Kirateshwar Mahadev Temple (Hindu temple) is situated on the banks of the Rangit river and is a popular place of worship among the tourists. The temple is dedicated to Lord Shiva and has lots of tales connected to the Hindu epic, Mahabharata. The temple is just 4 km from Pelling and is easily accessed from Geyzing and Pemayangtse too. The temple is also famous for its festival called Bela Chaturdesi. Bela Chaturdesi is a festival which is celebrated between November and December every year. This is when the temple is usually crowded with devotees from all over the state and the neighbouring states too. According to a famous legend associated with the shrine, Lord Shiva who was impressed with Arjuna's prayers and devotion, appeared before him at this very temple's location in the disguise of a hunter and blessed him to attain success in the war of Mahabharata.

The best time to visit this temple is from February to May but if you are a devotee then you can travel during the festivals. Bala Chaturdesi is the first festival celebrated in November and December. Followed by Shivaratri celebrated in February/March.

The main attraction of the temple is known for is the festival of the Bala Chaturdesi which takes place in November - December every year. And also Maha Shivaratri, this festival falls in the month of February or March and many devotees from near and far come to attend this auspicious event. Kirateshwar Mahadev Temple is dedicated to Lord Shiva but it also houses two platforms to worship Lord Rama and Goddess Durga. You can visit the temple during festive season and witness the entire town of Legship come alive to celebrate with zest and joy.

The beautiful temple is believed to be the oldest temples of the state of Sikkim and its serenity and purity of the draws devotees all over from the World. The unique Lord Shiva idol at the temple is made with stone and is in the form of lingam. And, it is a great belief that Mahadeva has emerged from that very stone.

The Kirateshwar Mahadev Temple is situated on the banks of the Rangit river, Sikkim.