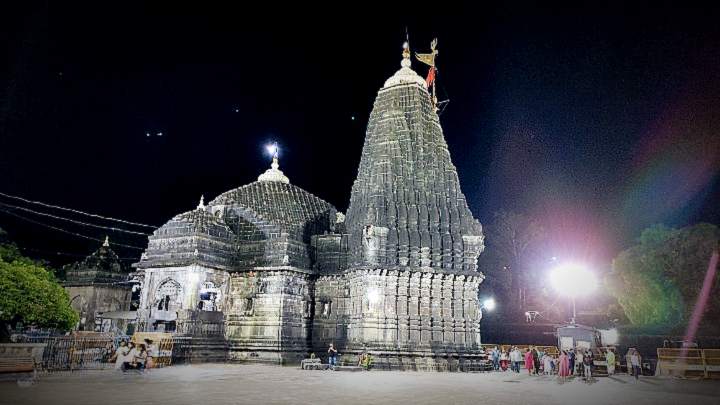 Trimbakeshwar Shiva Temple is one of the 12 Shiva Jyotirlingas
Trimbakeshwar is located in Nashik area of ​​Maharashtra.
It is situated between the three mountains Brahmagiri, Nilgiri and Kalagiri.

When God Brahma came to earth, Lord Brahma brought the same holy water of Ganga and requested to travel on the head of Lord Shiva.

The 24-year drought has left many starving

Varuna, the god of rain, was pleased with sage Gautam and sent rain to Trimbakeshwar.

Then, in the morning, Sage Gautam would look for grain in the fields around his ashram, harvesting during the day.

Due to this work, the goodness of Gautam Rishi increased, so the place of Lord Indra in heaven became unstable.

To diminish the virtue of sage Gautam, Lord Indra started raining in places of drought.

However, Gautam continued to feed a large group of sages and this increased his virtue.

The cow died when sage Gautam tried to drive the cow out of his field.

The cow was Jaya—a friend of Goddess Parvati, who takes the form of a cow.

Sage Gautama asked the sage to show him the way out of his sin.
And he was advised to ask Lord Shiva to leave the Ganges and bathe in the Ganges to get all his sins forgiven.

He goes up to the summit of Brahmagiri and did mortification for 1,000 years.

Shiva was pleased and decided to offer the Ganges to him, but Ganga was not ready to take the flow with Shiva.

So, Shiva created Tandava dance, (a form of dance) on the peak of delusion and destroyed its tangles.

Frightened, the Ganges appeared on the summit.
However, she disappeared again.
Gautam could not bathe in his water.

After that it appeared at Gangadwar, Varah-Tirtha, Ram-Laxman Tirtha, Ganga Sagar Tirtha.
So Gautama surrounded the river with enchanted grass and took vows on it.

After that it stopped, and it became known as Tirtha (Lake) Kushavarta.
From here the river Godavari meets the sea. Then the sins committed by Gautam Rishi were destroyed.

How Trimbakeshwar Temple was made?

Trimbakeshwar Shiva Temple is made of volcanic rock.

The temple of Trimbakeshwar Mahadev has a grand grandeur. This temple, enclosed within the courtyard of about two hundred and sixty by two hundred and twenty feet, is built of local black stone.

There is a story behind this too.

After losing the bet, he built an amazing temple out of it.

The temple used to accommodate the eye of world-famous Nasak Diamond, also known as EYE of Lord Shiva.

It was stolen by the British during the Third Anglo-Maratha War.
Currently, he is Edward J. The hand is held by an executive of a trucking firm in Greenwich, Connecticut, USA.