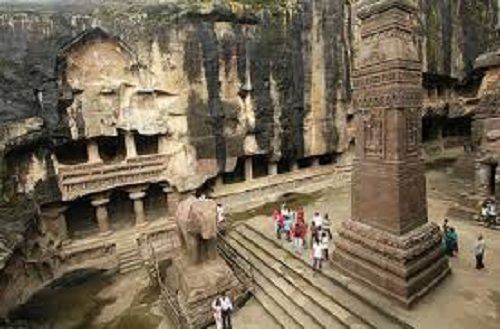 Kailasha or Kailashanatha temple is the largest of the rock-cut Hindu temples at the Ellora Caves. The Kailasa Temple is notable for its vertical excavation—carvers started at the top of the original rock and excavated downward. The traditional methods were rigidly followed by the master architect which could not have been achieved by excavating from the front.

A medieval Marathi legend appears to refer to the construction of the Kailasa temple. The earliest extant text to mention this legend is Katha-Kalapataru by Krishna Yajnavalki (c. 1470-1535 CE). According to this legend, the local king suffered from a severe disease. His queen prayed to the god Ghrishneshwar (Shiva) at Elapura to cure her husband. She vowed to construct a temple if her wish was granted, and promised to observe a fast until she could see the shikhara (top) of this temple. After the king was cured, she requested him to build a temple immediately, but multiple architects declared that it would take months to build a temple complete with a shikhara.

One architect named Kokasa assured the king that the queen would be able to see the shikhara of a temple within a week's time. He started building the temple from the top, by carving a rock. He was able to finish the shikhara within a week's time, enabling the queen to give up her fast. The temple was named Manikeshwar after the queen. M. K. Dhavalikar theorises that Kokasa was indeed the chief architect of the Kailasa temple, which may have been originally known as Manikeshwar. Multiple 11th-13th century inscriptions from central India mention architects born in the illustrious family of Kokasa.

June to March are the best months to visit Ajanta and Ellora Caves. It becomes a little difficult to travel around and explore the caves in summers April-May. Winters and Monsoon are ideal as the climate is pleasant from October to March and June to September which is the best time to visit the caves.

The Kailasa temple features the use of multiple distinct architectural and sculptural styles. This, combined with its relatively large size, has led some scholars to believe that its construction spanned the reigns of multiple kings. Some of the temple reliefs feature the same style as the one used in the Dashavatara cave (Cave 15), which is located next to the temple. The Dashavatara cave contains an inscription of Krishna's predecessor and nephew Dantidurga (c. 735–756 CE). Based on this, art historianHermann Goetz (1952) theorized that the construction of the Kailasa temple began during the reign of Dantidurga. Krishna consecrated its first complete version, which was much smaller than the present-day temple. According to Goetz, Dantidurga's role in the temple construction must have been deliberately suppressed, as Krishna sidelined Dantidurga's sons to claim the throne after his death. Based on analysis of the different styles, Goetz further hypothesized that the later Rashtrakuta rulers also extended the temple.

The entry fee is Rs. 50-60. It is double if you enter from 1st gate managed by contractor.

The currency on Lord Ram in Holland a European Nation