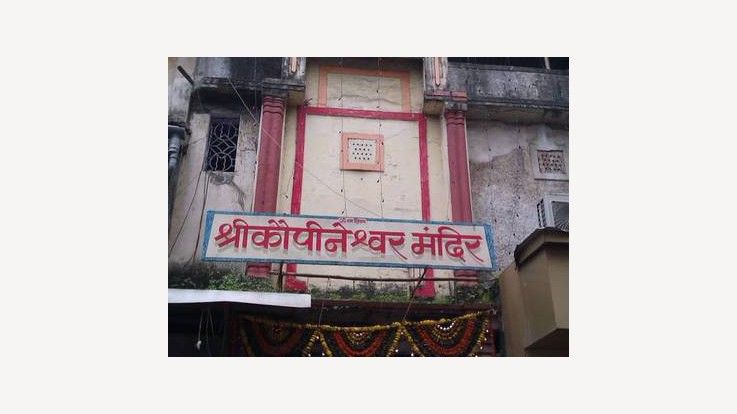 The Kopineshwar Shiva Temple in India is a famous temple in Thane which is dedicated to the Hindu God 'Shiva'. The temple houses a 5 feet tall Shivling, which is said to be one of the grandest statues of Lord Shiva in all of Maharashtra. Kopineshwar Temple lies in the city centre (appx 1 km from Thane station) and it is easily accessible from all parts of the city. Kopineshwar Shiva Temple is accessible for everyone during timings 6:00 am - 9:00 pm.

In  In the year 1760, this temple was renovated and rebuilt by Sarsubhedar Ramaji Mahadeo Bivalkar during the Maratha reign. Later in the year of 1879, this temple was renovated by the Hindus and since then many developments of this temple can be seen. Kopineshwar Mindir is famous Temple where many People visits to the Temple.  The temple consists of two entrances, one entrance is located opposite Masunda Lake and the other is inside Jambli Naka Market. At the main entrance of the temple, you will be greeted by a of Lord Shiva’s Nandi Bull. The Shivling inside the temple is about 5 feet tall and 5 feet broad, it one of the largest Shivling in Maharashtra.

To Reach Kopineshwar Shiva Temple all services are available. You can Travel by the Train or by other ways.

Kopineshwar Temple opens Everyday during timings 6:00 am to 9: 00 pm. The morning and the evening prayer sessions are quite famous. In Kopineshwar Shiva temple, Mahashivratri festival is celebrated on a grand scale

What is Business Grade Furniture?