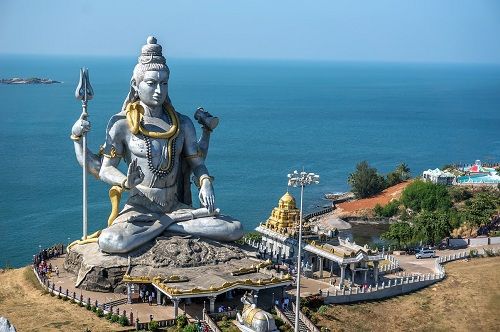 This temple boasts of the second highest statue of Lord Shiva in the world, and the sheer magnanimity of the statue will fill you with a sense of awe. This temple is built on the Kanduka Hill which is surrounded by the Arabian Sea on three sides. The main temple's entrance, also called the 'gopura' stands at 123 feet and you can witness the breathtaking view of the Shiva statue from the top of the gopura. Murudeshwar is around 180 km from Mangalore on the National Highway.

The entire surface of this temple is covered in the most intricate and detailed carvings that you will ever see. The compound of the temple has been modernized except the sanctum sanctorum, which retains its original form. The main deity of the temple is the Sri Mridesa Linga, which is believed to be a part of the original Atma Linga.

The Shiva statue here is quite an impressive one and will surely leave you with a humble sense of tranquillity. This magnificent statue is a perfect tribute to a God who is held in high reverence in lands far and wide.

Murudeshwar Temple dedicated to the Hindu God Shiva. This temple is nestled on a small hill called Kanduka and is surrounded by the Arabian sea from all the three sides. Murudeshwar temple showcases a contemporary work of architecture, and the main entrance of the temple which is also known as “Gopuram” stands at around 123 feets.
The Gopuram is guarded by two elephant statues. Another glorious structure in this temple is the huge idol of Shiva. This idol is the second largest statue of Shiva across the world and often fascinates the devotees towards it. A 237.5 feet tall Gopuram is located at the entrance and is also known as the Raja Gopuram.

Murudeshwara temple is the greatest marvel for the devotees of Lord Shiva that originated during the Vijayanagara kings. The name Murudeshwar originated in the Ramayana era. The Hindu gods attained immortality from Lord Shiva as a result of a penance dedicated to Atma Lingam. Ravana also tried attaining the same by worshipping Lord Shiva. When Lord Shiva (Indian God) appeared before Ravana and granted him Atma Lingam, he knew Ravana would wreak havoc into the world with such power. Thus, lord Shiva placed a condition on his boon. This condition was that if the Atma Lingam ever touched the earth, it would return to Lord Shiva.
Narada took advantage of this loophole in the boon. He knew Ravana would use this power for destruction. Narada approached Lord Ganesha for help. On his way back to Lanka, Narada tricked Ravana into thinking it was time for his evening prayers. Ravana handed the Atma Lingam to a Brahmin boy, who was actually lord Ganesh in disguise. After the prayers, on returning, Ravana found the Atma Lingam on the ground. Realizing he had been tricked, Ravana got angry and sought to break the Atma Lingam.

October to May is the best time to travel Murudeshwar Temple. MahaShivaratri is an important festival here and is celebrated with great enthusiasm. It typically occurs in the month of February or March.

The whole temple is lined with the most detailed and intricate carvings depicting Lord Shiva giving the teachings of the Geeta to Arjuna and Ravana, giving Atma Lingan to Lord Ganesha. A small temple devoted especially to Sri Rameshwara is also located at the backyard of the temple.
You can also have a glimpse of the shrine of Shaneeshwara placed close to the idol of Shiva. Murudeshwar Temple is one of the most visited tourist destinations in India. This place especially gets jam packed during Maha Shivaratri when thousands of people from across the world visit this place to enjoy the celebration to the core.

Timing for Darshan at Murudeshwar Temple:

Murudeshwar Temple lies in the Bhatkal Taluk of the north Kannada district.