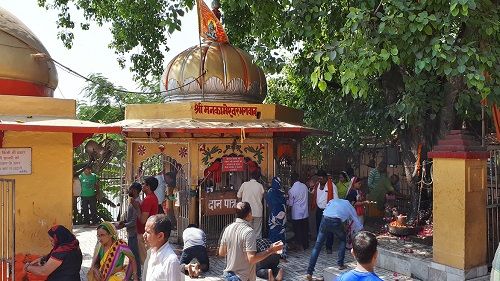 Mankameshwar Shiva Temple is located in Prayagraj, Uttar Pradesh and it is also located at the bank of Yamuna River in the cantonment area, Mankameshwar Temple is one of the highly revered Hindu shrines in Prayagraj. It is one of the oldest temples in the world, the Mankameshwar Mandir is an ancient temple of Lord Shiva and Parvati located in prayagraj. It features beautiful statues of Lord Shiva and Goddess Parvati. On Mondays, the temple attracts extraordinary crowds of devotees offering milk, flowers, and many other eatables to the Lord. The construction of the temple is noted for sculptures carved on the walls and different pillars. Some of the sculptures are elaborately colored. Frescoes are engraved on the four walls of the temple, making it look aesthetically pleasing while also depicting tales from the Hindu Mythology.

The Mankameshwar temple is an ancient temple of Lord Shiva and Parvati located in prayagraj. It features beautiful statues of Lord Shiva and Goddess Parvati. Mankameshwar Mandir is situated at the rear end of the bank of yamuna river. Therefore, it has enormous religious importance. from the terrace of this temple ,view of Yamuna river, is most attactive, and in moon light this beauty increases many folds. The speciality this temple is of daily decoration of the statue of lord shiva. During the Mahashivratri, many people visit to shiva temple in India. During the entire period of arti the sound of blowing so shankh ,beat of drums and ringing of bells produce melodious sound of music. At the end of the above performances when the prayer in loud speech starts then it appears as if all Gods are reciting and chanting paths. Mankameshwar temple lies in the banks of river Yamuna, near Saraswathi Ghat. This is one of the prominent and old Shiva temples of Prayagraj which is also known as Pishach Mochan Tirtha. On every Monday & on Shivratri day, devotees throng the temple in large number.

The Temple is Located 8 kms from the railway stations.

Mankameshwar temple is a famous temple in Prayagraj and it lies in the banks of river Yamuna, near Saraswathi Ghat. On every Monday, Savan or on Mahashivratri, there are the large number of people visit Mankameshwar temple.

6 Essential Tips For Any Kitchen Backsplash