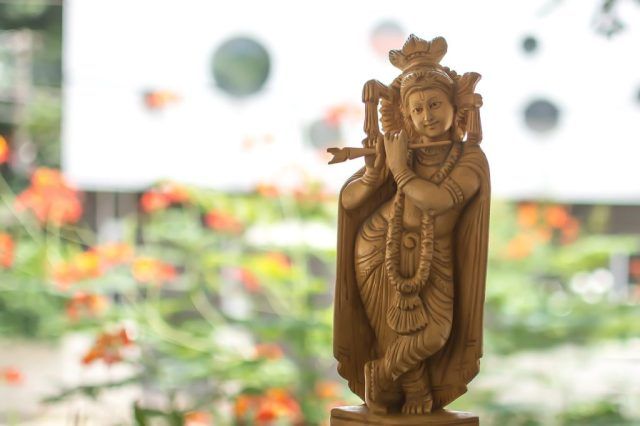 Lets first take the case of Bhishma Pitamah. He had to Suffer on a Bed of Arrows? To the question as to why Bhishma Pitamah was suffering this punishment even when he had not committed any sin during past 72 birth lives (Great Bhishma could peep into his past lives through Samadhi), Lord Krishna replied him that he committed a folly in past 73rd life birth when he inflicted injuries to insects by piercing thorns/needles into their bodies. Those thorns have now appeared as the bed of arrows for you. Your sinful Karma remained dormant as you were a pious person throughout these lives but since you have now become a party to Adharma of Duryodhana, the sanchit evil Karma’s of 73rd life has ripened now.

Next, let's take the case of Ashwathama who was given a curse by Lord Krishna at the end of Mahabharata war.

At the end of the Mahabharata war, Ashwathama entered into the tent of the Pandavas and mistakenly killed all the 5 sleeping sons of Pandavas and set the camp on fire. Later on Ashwathama through deadly weapon called Brahmastra also killed the child in the womb of the pregnant ‘Uttara’ (wife of martyr Abhimanyu - the great archer and son of Arjuna), however, Lord Krishna later revived the child through His Grace. So Ashwathama tried to kill everyone in the Pandava’s family. On this Lord Krishna became very angry with Ashwathama & Cursed him badly. Lord Krishna Cursed him like this:

This preview is unavailable in the editor.

O! Ashwathama “You will carry the burden of all the people’s sins on your shoulders and will roam alone like a ghost without getting any love and courtesy till the end of Kaliyuga, You will have neither any hospitality nor any accommodation; You will be in total isolation from the mankind and society; Your body will suffer from a host of incurable diseases forming sores and ulcers that would never heal. May you, Ashwathama, lead the most wretched life anyone can ever lead. May you never receive love or affection ever in your life unto the end of Time ”.

It is said that from the last 5152 years, Ashwathama is still roaming on earth in and around the Narmada river in India. Mahakaal (Lord Shiva) can only free him from the curse so it is said that he still visits the shivling at a temple near the Narmada river every morning and places a rose flower there in the temple which he creates from his tap / spiritual power every day.

Similarly, all those people who do bad Karmas are Punished surely by God at one time or another as showed in the above examples. Otherwise, also God has created 8.4 Million different species in which a person goes after death. Say if a person has done very Bad Karmas, then he may become an animal or bird-like a dog, snake, cat, crocodile, cow, bull, monkey, pig, horse, monkey, lion, crow, falcon, etc. or a person can become insect etc. also & may have to suffer for innumerable years in such lives for his bad Karmas before he can get redeemed for his bad Karmas.

Below are few verses of Bhagwat Gita which explain about how a soul travels from one body to the other & where it goes as per the Karmic law:

"Sri Krishna said: O Arjuna, When one dies in the mode of goodness (after doing good Karmas) , he attains to the pure higher planets of the great sages."

This preview is unavailable in the editor.

So it is said that we should do all our Karmas for God only as by doing such Karmas no evil result shall come out of those Karmas in future lives.

"Sri Krishna said: Work done as a sacrifice for Vishnu has to be performed, otherwise work causes bondage in this material world. Therefore, O Arjuna, perform your prescribed duties for His satisfaction, and in that way, you will always remain free from bondage."

So let’s do Good Karmas only so that we shall get Goof Fruits of those Karmas in future births. Let’s do all the Karmas for God only as by that way God shall protect us always.

Jai Shri KrishnaGod at one time or the another